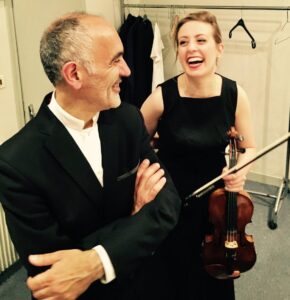 Besides the immediate musical bond that they both felt from their first collaboration around Beethoven sonatas, they have since deepened several works from the sonata repertoire and developed a specificity to their duo. They both play by heart, as the Ferras-Barbizet duo did.

Replay their concert during the Festival France Musique 2020 : 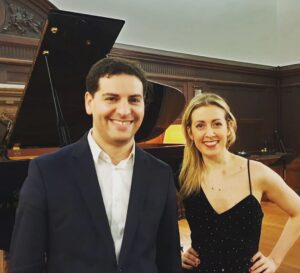 ♫ Tribute to Ginette Neveu
In this program, Marina brings to life in our memories the greatest violinist of all time, Ginette Neveu, to whom she paid tribute on France Musique in the summer of 2019. A concert which will be given at the Philharmonie de Paris and captured by France music in 2021.

♫ “Music room” recital
This recital program recreates concerts as the great violinists did until the middle of the 20th century with a first part of large repertoires (sonatas) then a second part of small pieces.
This is the subject of their disc released in February 2020 by NomadMusic, with transcriptions and arrangements by Kreisler and Heifetz, sometimes lyrical, sometimes virtuoso pieces.

All information about Marina Chiche